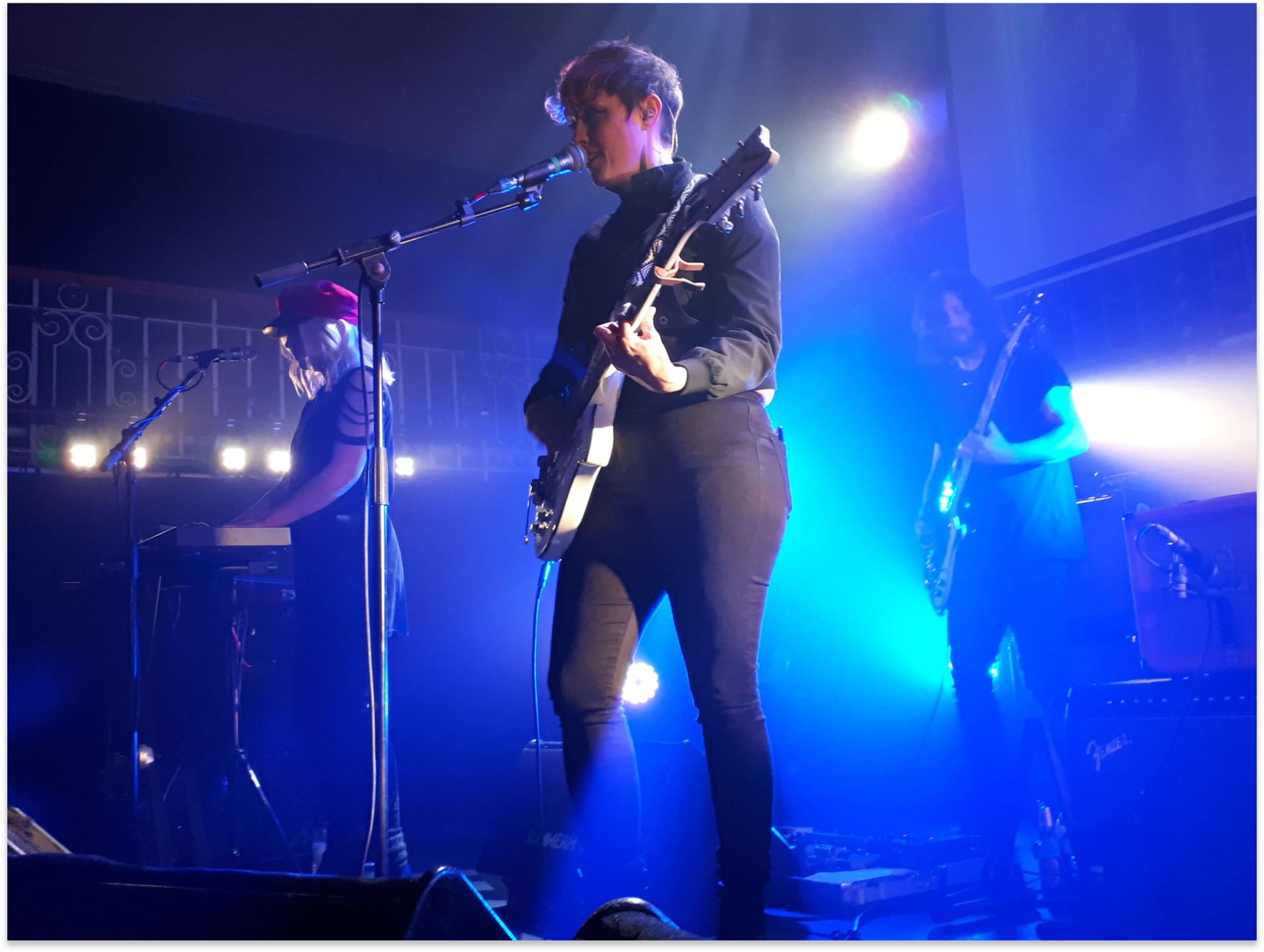 Julia is a regular attender at Nothing Ever Happens Here… gigs at Summerhall and in fact at pretty much all indie gigs around Edinburgh.  During lockdown she’s been developing her work as a music writer.  She writes reviews for two sites: Play It Loud and 25 Years Later.

We loved Julia’s proposal in response to our open call because it combined celebration of the remembered experience of the joy of live music, sadness that we’ve missed out on that for so long, and hope for a future of shared gig-going.  Julia has written a new piece which looks back at a sold-out She Drew The Gun/Peaness gig at Summerhall last November, through the lens of the pandemic and the loss of the shared experience of gig-going.

Summerhall is a special place. Simples. Gig-goers in Edinburgh know it. What other venue has a Dissection Room as the main gig space with its viewing gallery! It has been fondly described as the best L-shaped venue in Edinburgh, and the ironic name of their live music programme is Nothing Ever Happens Here. Summerhall’s live music covers every genre and its independent status allows it this freedom.

As I write it is Independent Venue Week January 2021, a celebration of live music and grassroots venues in which Summerhall has participated in previous years. Of course this year IVM cannot be held in a physical shared space but has moved online. And instead of being right in front of a band at a gig, I’m reviewing a gig I attended at Summerhall back in November 2019: She Drew The Gun supported by Peaness.

Louisa Roach from the Wirral’s She Drew The Gun wrote a powerful emotional poem for Independent Venue Week 2020, which stopped me in my tracks when I first heard it.

These few lines could have been specifically written for Summerhall with its own micro-brewery Barney’s Beer:

A drum kit, a bass, some synths and guitar
and a few words about life, all the joys and the scars
all in your home town you don’t have to go far
and when it comes to the ale you know where you are
cos it’s not a “Carling” sponsored bar

Both the bands I had seen previously at Sneaky Pete’s and so for them to be on the same bill at Summerhall was pretty exciting, and an inevitable sell-out. I was there with a few friends, and right at the front for both. Peaness are a three piece indie-pop band formed in Chester in late 2014. The all female trio have a unique and upbeat brand of indie pop full of hooks, charm and depth. Their spot-on harmonies and razor sharp observations are both hilarious and fun. We couldn’t resist leaning over at the end of the set and saying thank you to them – one of the joys of a venue like Summerhall. No barriers here.

She Drew The Gun have an individual sound. Louisa is a poet with a political awareness and sense of social justice which oozes through her music. For a band with only two albums out, this was a long set of around 90 minutes which is testament to their appreciation of the fans. They wrap up with a cover of The Beloved’s “Sweet Harmony” with lyrics “Let’s come together right now in sweet harmony” – a perfect line to express the community of gigs. 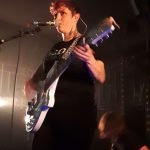 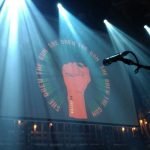 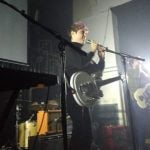 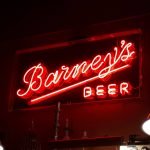 To emphasize the importance of Independent Venues such as Summerhall to musicians, I put this question to both the bands:

“What do independent venues mean to you, and how does it feel to play in them?”

I absolutely love playing independent venues for all the reasons I mentioned in the poem I wrote on our way to our independent venue week gig in Stockton on Tees back in January 2020. It’s a love letter to the whole grassroots scene, which even before a worldwide pandemic was always under threat from venue closures through endless cycles of gentrification of our cultural spaces. It got the biggest cheer of the night to be honest, people love their independent venues and cherish these spaces that nourish artists, spark consciousness and remind us of the power of our collective forms. It’s scary to think of what the musical ecosystem will look like on the other side of all of this, I just hope that those with the power to shape things going forward will recognise the importance of a healthy grassroots scene to the UK music industry, big love to IVW for continually reminding us of these things.

Independent venues are where it all starts, for so many artists. Like literally our careers wouldn’t have started without them. We’ve been lucky to play so many of them, including a bunch on our headline tour during last year’s Independent Venue Week and they all have such character and a welcoming atmosphere to them. The energy is just more wholesome and humble than your bland, identical o2 Academy’s. Playing at these venues make me feel like I want to punch my fist in the air, smile, and say “yay!”. Long may they continue to shape the live music scene.

And from those in the crowd, this is what it means to them:

“That night at Summerhall, She Drew The Gun were on top form and dished out what seemed like their entire repertoire in a hefty 90 minute set, band leader Louisa Roach seamlessly slipping from plucking the strings of her giant white guitar one song, to giving a solo mic rap routine the next. With her trademark Harrington and DMs she performs her powerful true-life-trauma ballads and thought-provoking protest anthems with passion. The impressive flickering graphics displayed on the big screen behind the band echoing Louisa’s message just in case anyone inside the venue was ever in any doubt.”

“Always enjoy the intimate, atmospheric space at Summerhall and She Drew The Gun played to an enthusiastic and knowledgeable crowd. Incredible to see Louise Roach bewitching the crowd with her powerful vocals, poignant poetic lyrics and political ramblings on contemporary Britain. Who was to know that a few months later meeting together like this would be a rarity.”

“A little more than eight months after their last Edinburgh gig at Sneaky Pete’s SDTG were back in town playing the considerably larger Summerhall. Most of the latest album, ‘Revolution Of Mind’, got played, kicking off with the insanely catch ‘Resister’. The whole set felt revolutionary and inspiring. Who else but Louisa and her gang would reinterpret Frank Zappa and The Beloved? Peaness were fab too mixing in a couple of new songs with established favourites like ‘Oh George’.” 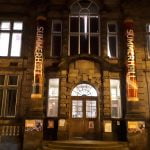 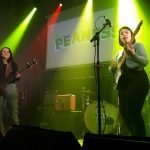 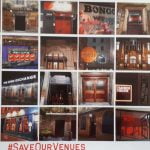 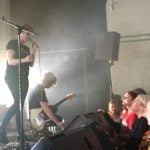 Summerhall provides a community around its live music performances, but is also part of the larger community of independent music venues in Edinburgh. Sneaky Pete’s even have an office there.

During December 2020 I created a daily advent calendar post on social media of Independent Edinburgh Music Venues which of course included Summerhall. This was with individual photographs I had taken of each venue, and it was poignant to see these venues closed and remember the gigs I had attended and shared with friends. The final poster shows the number and variety of independent venues in Edinburgh. I am a regular gig-goer and it has been such a loss not having that shared experience during this pandemic.

Oh and by the way, this is just Summerhall as a gig venue, which is only one part of its whole. There is so much more to the building and the community it houses.