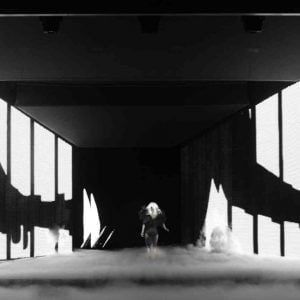 ‘When Lady Gaga embarked on the early stages of her Monster Ball tour in 2009, it marked the provocative pop princess’s crossover into the major league, with a spectacular show described by some as the first ever pop electro opera.

In its look, however, Monster Ball also unwittingly formed a bridge between a pub theatre in Shepherd’s Bush, art-punk band Wire, the Royal Opera House, lingerie label Agent Provocateur and the closing ceremony of the 2012 Olympic Games. All of these, including Monster Ball, featured the work of theatre designer Es Devlin. Fans can get a taste of her work for Monster Ball in Transformation and Revelation: Gormley to Gaga – Designing For Performance, an exhibition of 33 British designers which opened at Summerhall in Edinburgh this weekend.’

Read the The Herald’s preview of the current Summerhall exhibitions