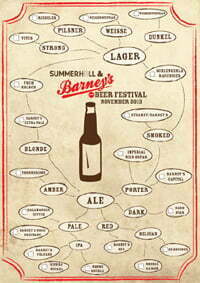 This weekend Summerhall hosts its second beer fest of 2013. After the rip-roaring success of the first beer fest in May, it’s back, and bigger, with all and more for the same ticket price.

Friday & Saturday night take the traditional beer festival and give it that Summerhall flavour – beers on tap range from US Sierra Nevada, Swedish Micro-brewer Nils Oscar, Weihenstephan from Germany; this festival focuses on many beers that are not available elsewhere in Edinburgh. Styles on tap include Barney’s two new brews Eteaket Lapsang Porter, and Barney’s Extra Pale alongside four regular Barney’s, also for sampling will be Stouts, Belgium‐style Nøgne, IPAs and the charmingly named Thornbridge Sequoia and the Salamander Mudpuppy.

On Sunday, we mix things up a little, with the same beers, but more food – and kids come free. Wild Rover will be serving their own take on the Sunday lunch with a Pheasant Plucker’s Pie (Pheasant breast, George Bower’s haggis and beetroot pie, encased in homemade pastry and served with creamy mash) and Wild Rover Chowder (Naturally oak-smoked haddock, cooked in our own fish stock and served with Scottish leeks and spuds). A special session of Animal Antics, the Summerhall drop-in play and create sessions for parents and little’uns aged 0 – 6 years,  will run from 2pm – 5pm. Bring friends and family along, sample a few beers, and relax into the festival atmosphere.

What to expect! Get the festival lowdown. Tickets £8 available here.