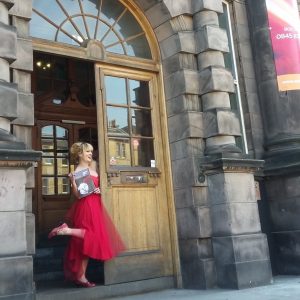 Once again, Summerhall is proud to present its annual Autopsy Award to two outstanding and thought-provoking pieces of new performance. Established in 2013 as part of Arches Live at Glasgow’s much-missed multi-arts venue the Arches, the award saw two Arches Live productions restaged the following year on Summerhall stages as part of our festival programme. With the sad and unexpected closure of the Arches in early 2015, we’re honoured to continue a small part of its work in supporting ground-breaking new theatrical talent. This year’s awards were chosen with the assistance of Jill Smith and Kathryn Boyle of Feral Arts, and formerly of the producing team at the Arches.

Glasgow-based performance artist FK Alexander obliquely describes her work as being founded upon “aggressive healing // radical wellness // public vulnerability // noise music // 12 step recovery.” Presented in conjunction with noise band Okishima Island Tourist Association, (I Could Go On Singing) Over the Rainbow sees Alexander and the band play and sing along with Judy Garland’s last ever public performance of ‘Over the Rainbow’, four months before her premature death at the age of 47 from a barbiturate overdose. Described by the Guardian’s Lyn Gardner as ‘desperate, moving, distressing and beautiful too,’ the show tracks, through the medium of performance and the reaction of others in the audience around us, the power of song to define both performer and observer.

Originally a zoologist, then a theatre designer and now a performance artist, Mamoru Iriguchi is based between Edinburgh and London. His 4D Cinema project sees the performer turn himself into a human cinema, wearing a screen upon his head with which he interacts with the filmed performers, first to tell the life story of Marlene Dietrich in 3D and then to, as he describes it, ‘time travel in reverse at a speed of 60 minutes per hour’ in 4D. Mary Brennan of the Herald described it as ‘a work about time as well as perception… a really cunning, witty work that makes the brain cells spark with delight.’