Robert McDowell, in response to the Brexit vote… 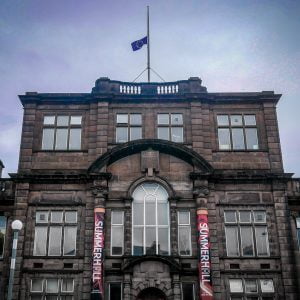 Robert McDowell, director of Summerhall said that in response to the Brexit vote, Summerhall, over which the EU flag flies at half mast mourning the death of UK membership, we very much welcome and dedicate our support to Janet Archer’s statement for Creative Scotland confirming Creative Scotland’s commitment to internationalism in the arts, to bringing people together across all borders, and to linking firmly with our partners across Europe and do all we can to project our creativity and engage even more with Europe.

Where politics and economics fail, culture must step in to hold us all together. The National Galleries with two world-class exhibitions of Surrealism and Impressionism remind us we are all culturally Europeans first and not just Scottish, British, Irish, Welsh, or English.

Some commentators have said this is the most serious UK crisis since World War II. That war inspired the necessity of founding the Edinburgh Festival to heal the wounds of war through the languages of the arts. The festival became the world’s biggest and most international arts festival in the world because the arts are not about mere entertainment but about building international understanding between divided peoples. We have to rededicate ourselves to healing wounds and especially the new wounds that have sadly opened up in Europe only one generation after the end of the Cold War that had most painfully divided Europe profoundly so for half a century.

Note to editors: Summerhall is Europe’s biggest private arts centre, staging 800 shows and events annually by hundreds of artists in all art forms, from more than 30 countries, and receiving over half a million annual visitors.