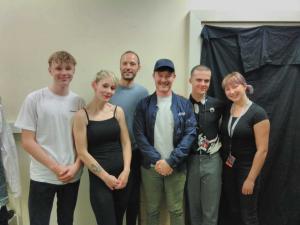 Sia producer David Russell attends a Summerhall show based on a mother and son’s mutual love for the Australian pop-star.

The cast and crew of ‘The Ballad of the Apathetic Son and his Narcissistic Mother’ were delighted to chat with an audience member following their show, only to discover that he was David Russell, Sia’s producer.

21Common, the company behind the show which includes a soundtrack of Sia’s most well-known songs, said that Russell had “tears in his eyes” as he told them how much he loved their show, and that he “couldn’t wait” to tell Sia all about it. “He said she’d be thrilled her music had been used in this way”.

“David was in Edinburgh for a holiday and noticed the show was on so thought he’d check it out – it’s the kind of thing that only happens at the Fringe!”

The Ballad of the Apathetic Son and his Narcissistic Mother ran at Summerhall during the Edinburgh Fringe 2018.