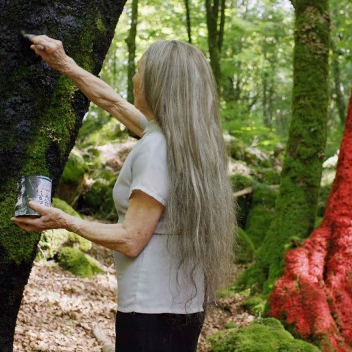 "Intriguing, beautiful, powerful and highly symbolic (...) Amama rejects a standard narrative and long-winded verbal explanations, instead relying on people's looks, silence and symbols. What actually does the job of the narration are the gorgeous images and the nimbleness with which they are edited, and they mean as much as, if not more than, the dialogue. Through this technique, we get to know a family living in a country house, slap bang in the middle of the mighty northern natural landscape"
Cineuropa
"Deep and strong like the roots of a beech, Amama is a beautiful journey from the heart of the baserri, the ancestral cradle of the Basque culture, where home and work share the same space linked to tradition. Rooted in reality but delving into the fable just enough. Amama shows Altuna’s great cinematic maturity"
Cinemaerrante
Unreserved seating. 14-24 stairs to venue.
_ Price: £9 / £8
_ Age Group: 15+ (under 18s accompanied)
_ Venue: Red Lecture Theatre
Tickets

A journey into the filmography of one of Spain’s most original filmmakers. Arthouse cinema at its core, Asier Altuna joins us for a special evening showing some of his most celebrated short films and the screening of award-winning film AMAMA (When a Tree Falls), followed by a Q&A with the director.

This event is part of Cinemaattic’s retrospective KIMUAK: 20 YEARS OF BASQUE FILMS, celebrating twenty years since the Basque Government decided to include the production and distribution of short films as a core area of support and national interest. Since 1998, the public funded agency Kimuak selects and distributes internationally the best sprouts from Basque short-filmmakers.

Asier Altuna was part of the first Kimuak selection back in 1998 with ‘Txotx’. Strong advocate of the short-film format, a genre which he has returned despite the success of his feature films.

synopsis
The story of a family; the story of a conflict. The rural and the urban, the past and the present, parents and their offspring: opposing ways of life struggle against one another whilst, in eloquent silence, the grandmother — Amama — watches her family’s destiny unfold.