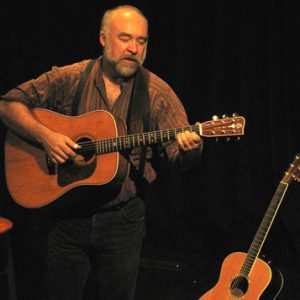 Dan McKinnon grew up in a slightly extended family, his maternal grandmother becoming an important part of his home-life after the sudden and tragic death of her husband in 1960. She beguiled Dan and his siblings with countless tales of turn-of-the-century Halifax, of living through magical days and life-altering events. His parents brought their own personal glimpses of family, of life’s experiences and events, adding their mix to the stories of his youth. Those narratives of earlier days took on special significance when brothers and sisters, uncles and aunts, nephews and nieces met and relaxed… then the stories took flight and raced along like an old steam engine on a section of straight track, throttle out, fast and furious.

Thirty years of performing and six recordings later – from the coffeehouses, pubs, and bars of his early beginnings in Atlantic Canada, Dan, “blessed with a gorgeous baritone voice, and an exceptional command of phrasing, light and shade” (David Kidman, The Living Tradition, September/October 2006), continues to convey his “finely crafted songs” to audiences through his yearly tours in the UK and performances in and around the Canadian Maritimes. Recent forays into Ontario, the US, as well as a tour of Southeastern Australia in 2007 have only furthered to cement Dan’s commitment and passion to the songs and stories of his Atlantic Canadian home.