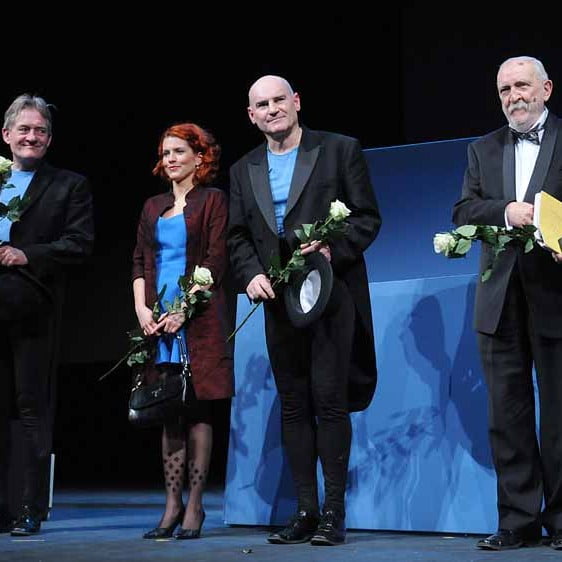 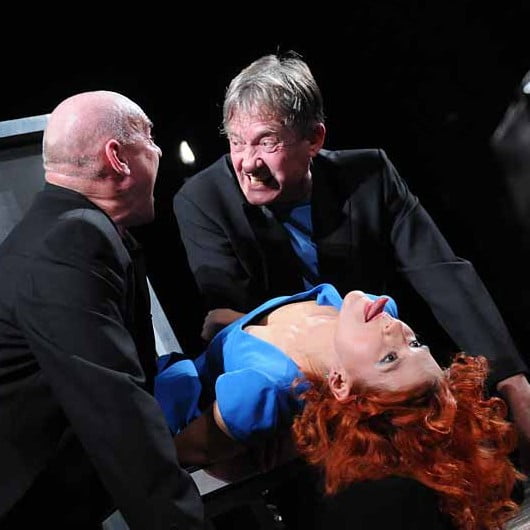 "Schaeffer is a genius! The show is surreal, but it is strongly rooted in our reality. It resembles a musical partiture. The viewer is not just a passive receptor. She reacts and responds to what the author is trying to tell her. This paradox of surreality and reality bordering each other is what makes A Multimedia Thing a Great Thing."
Konrad Przeździęk
"A Multimedia Thing has the aura of a joke, a clown act; but underneath its humor, there is the sadness of an artist watching the barbarization of our lives. A Multimedia Thing is the lethal battle over everything: over goodness and beauty. It is a battle led by an avant-garde artist who is constantly searching for a new tone."
Tomasz Miłkowski, Przegląd
Venue: The Tom Fleming Centre, Queensferry Road, Edinburgh, EH4 3EZ
_ Price: £15.00 / £13.00
_ Age Group: 14+
_ Venue: null

A Multimedia Thing premiered in 2007, at Teatre Bajka in Warsaw.

Three actors—two males, Wal (played by Waldemar Obłoza) and Mar (played by Marek Frąckowiak), and Agn, a woman (Agnieszka Wielgosz)—are trying to hold a rehearsal for a play, while Schaeffer himself plays piano in the background. The play is meant to deal with such issues as culture in general, and music in particular, the art of composition and how music is perceived by listeners. However, the grandiloquent statements contrast with the performers’ lack of professionalism and their narrow-mindedness. They appear as quarrelsome buffoons, who keep forgetting their lines and, despite this, want to play the leading role. They also treat Schaeffer, who is playing the piano and who patiently tolerates the growing chaos, with contempt and hostility.

A Multimedia Thing does not have a linear plot. There are several motifs, which together constitute the play being rehearsed. The men both jostle for position: each takes himself to be a great actor, dismissive of the other. Wal asks Mar if he is a doorkeeper or maybe a stage technician, after which he analyses the situation of a composer who, in contrast to a writer or painter, cannot take inspiration from his surroundings and is forced to navigate the terrain of the abstract. Mar reflects on the issue of whether composers are able to develop friendships, and answers that he himself, consumed by the world of sounds, needs no such relationships.

BOGUSŁAW SCHAEFFER is the most eagerly staged playwright amongst Polish living authors. Composer, theoretician, music critic, pedagogue, playwright and graphic designer Schaeffer has created 550 musical works in 23 different musical genres, written 46 plays (translated into 17 languages, including Estonian, Hungarian, and Hebrew), of which 33 have been staged in Poland—some running for 20 to 30 years—and designed about 400 graphic works. Widely regarded as a pioneer of “new music” and avant-garde theatre, Schaeffer is one of Poland’s most influential contemporary composers and the most frequently performed playwright in Poland today.

There will be a book launch of Schaeffer’s plays. More about the book: http://oberonbooks.com/schaeffer-anthology