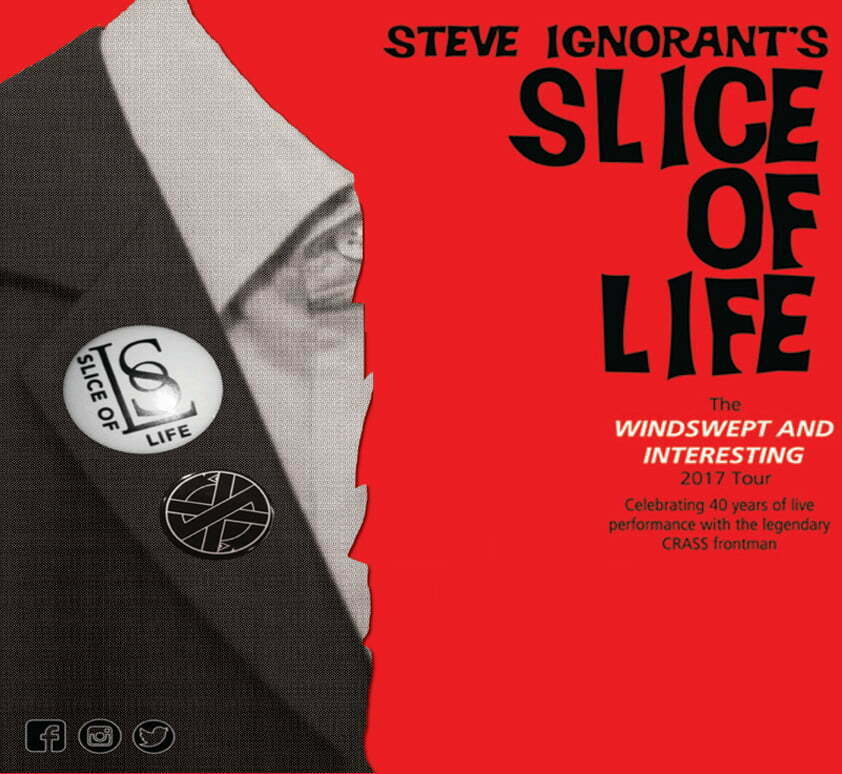 "Crass has a huge legacy and their importance can’t be overstated, but Steve was always just an ordinary, if intelligent, punk who happened to become the singer. He didn’t ask to be cast as some sort of ‘Voice of a Generation’. This album is his chance to move on and he has succeeded in making an interesting album full of honesty and gritty charm"
Louder Than War
Unreserved seating. Accessible for wheelchair users (please contact venue)
_ Age Group: 16+
_ Venue: Main Hall
Tickets

Steve Ignorant is a singer/songwriter and co-founded the anarcho-punk band Crass with Penny Rimbaud in 1977. After Crass, he sang with Conflict, Schwartzenegger and Stratford Mercenaries. In 2007 he performed Crass’ entire Feeding of the 5000 album live at the Shepherds Bush Empire and throughout 2010-2011 presented The Last Supper, touring/celebrating the songs of Crass around the globe, ending with a farewell gig at Shepherds Bush Empire in November 2011. In 2013 Steve and Paranoid Visions decided to record an album. The result ‘When …?’, a hybrid of styles, all with a nod to early 80s anarcho-punk.

Having cut his punk teeth in Crass, Steve Ignorant’s latest project – Slice Of Life – allows for the more contemplative side of his song-writing to reveal itself. Like musical depictions of a British kitchen-sink drama, the songs on the debut album Love and a Lamp-post (Overground Records, 2014) provide vivid vignettes of the everyday. Both personal and universal, Slice of Life present ruminations from the bar stool honed on the late-night walk home. Musically, the band is built on an acoustic arrangement of piano, guitar and bass. Having shed the punk noise that defined Crass, Slice of Life retain the emotional impact and compassion that has long distinguished Steve’s work.