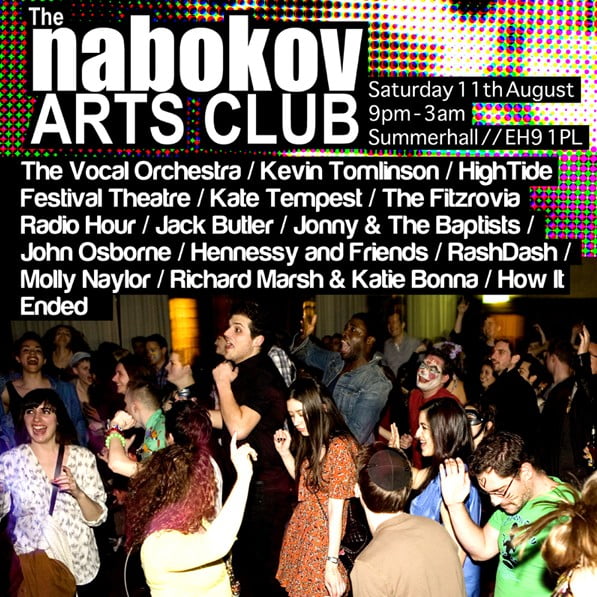 Online tickets are currently available at edfringe.com and tickets can also be booked by calling the Summerhall Box Office on 0845 874 3001 or by visiting the venue.

After 5 years of blowing up the biggest and best live arts club nights in London, the nabokov Arts Club finally makes its debut at the Edinburgh Fringe! An extravaganza of live theatre, music, cabaret, comedy, poetry and visual art wrapped up in a big fat party, the Arts Club, previously featured in The Guardian, Time Out’s Hot Picks and Critics’ Choice, and The Independent’s ‘Best Nights Out’, showcases the best new work, first, from the most exciting emerging artists alongside some of the biggest names in the business.

A massive theatrical line up features exclusive extracts from HighTide Festival Theatre’s brand new show “Bottleneck”, live period radio pastiche from The Fitzrovia Radio Hour, high energy musical theatrics from RashDash, improvised comedy theatre from The Matey Institute and an extract of How it Ended Productions’ “You Obviously Know What I’m Talking About” performed in an old laboratory.

Rounding it all off into a massive party are Stirling lads Jack Butler who will bring their Bloc Party style indie electro to get heads nodding and toes tapping, before The Vocal Orchestra, created by Schlomo, perform their have-to-see-it-to-believe-it acapella gymnastics, aural stylings and showstopping beatboxing that met universal praise and swooning crowds at the E4 Udderbelly this Summer. Then finally our house DJs spin soul, funk, house and electro till late.

Hosted at Edinburgh’s most exciting venue for multi-disciplinary work, Summerhall and taking over a variety of rooms of this old University Vetinary department including the Dissection Room, Anatomy Lecture Theatre and Histiology Lab with a 3am licence for the biggest night of the festival – if you only go to one party during the Fringe, it has to be the legendary nabokov Arts Club!

Additions to the line-up will be announced exclusively on the nabokov blog: www.nabokov-online.com and click ‘News’