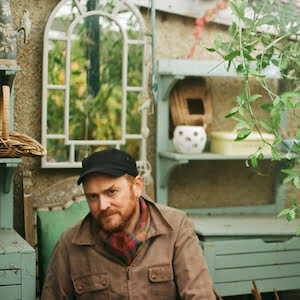 Few artists work from as broad and eclectic a platform as James Yorkston. Growing up in the village of Kingsbarns in Fife, James has been releasing a series of much acclaimed albums on Domino Records since 2002 – His debut album ‘Moving Up Country’ was ‘Rough Trade Album of the Year’.

James’ break came a year previously, after he sent a demo cassette to folk-rock legend John Martyn asking for a support slot on the Edinburgh date of John’s upcoming tour, only for John to hear the cassette and offer James all 31 dates of the tour.

James was an integral original member of the much lauded and hugely influential Fence Collective (King Creosote, Pictish Trail, KT Tunstall, Beta Band etc) and his style shows a mastery of folk traditions, often drawing on traditional songs, which has seen him collaborate with such heritage artists as the Waterson family, Martin Carthy and the late Bert Jansch, whilst producing his own albums alongside contemporary artists such as Four Tet, Rustin Man, David Wrench and Alexis Taylor (Hot Chip).

"The finest song-writer of his generation"John Peel