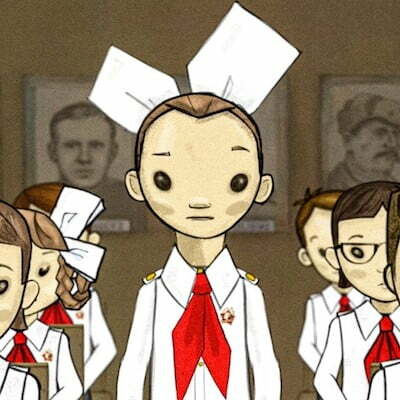 Age Group: 15+ (under 18s accompanied)
Duration: 82m
Unreserved seating. Content: Themes of war, scenes of violence. The feature will be screened in Latvian/Russian with closed captions.

My Favorite War is an animated documentary telling the personal story of its director, Ilze, about her growing up in the Cold-War USSR. It is an exciting coming-of-age story about finding one’s own identity, truth and loyalty.First, we meet Ilze as a little girl playing war at her granddad ́s farm, then she is faced with the horror of war threats at school. Ilze lives in a clash between the Soviet reality and pro-paganda denying what people actually are experiencing. Moreover, Ilze also finds out how opposite in their beliefs are people whom she loves the most.The film is about choices a girl has to make in a very young age, then getting wiser and finding courage to speak out.

Manipulate recommends a 15 certificate for this film.

The feature will be screened in Latvian/Russian with closed captions.

"...a nine-year labor of love from a Norwegian-Latvian team, it combines distinctive cutout animation with family photos and archival footage to forge a look at an authoritarian society through a young girl’s eyes"Variety