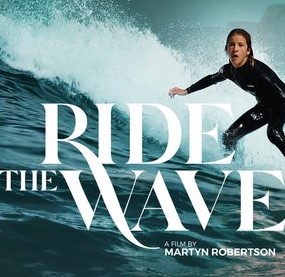 Ride the Wave is an award winning Scottish feature documentary following young surfer Ben on his quest to become a big wave surfer.

Having participated in competition surfing worldwide, 14-year-old, under-18 champion, Ben, is prepared to put his life on the line to ride one of the biggest and most dangerous cold water waves in the world at Mullaghmore, Ireland.

If he gets it right, he joins an elite group. If he gets it wrong, the consequences are terrifying. Danger, opportunity, and dilemma collide, propelling Ben and his family towards an unknown destiny.

Director Martyn Robertson intimately follows the family over a three years period as they support Ben towards achieving his dream.

Premiering at BFI London Film Festival in 2021 and screening at the Great8 at Cannes, Ride the Wave has enjoyed an award winning International run at over 25 film festivals worldwide and releases in UK cinemas from 9th September 2022.

"“Ride The Wave is a breath of fresh air. Tense, moving, and raw, it is a celebration of talent, resilience, and some top-class parenting.”"LOUD & CLEAR MAGAZINE

"“Robertson’s film is excellent at teasing out Ben’s date with destiny – the desire to prove himself, the need to evolve as a surfer, his deep-seated fascination with giant waves.”"THE SCOTSMAN