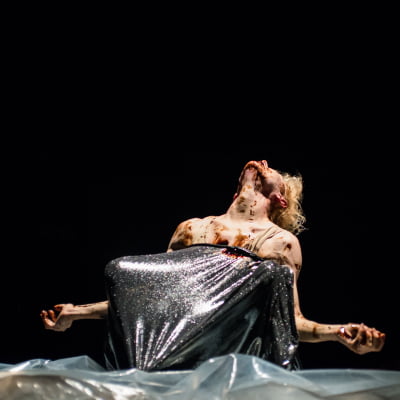 This event has been cancelled – please see a statement from the organiser at this link.

This double-bill veers between anarchy, punk music, heroism and how idolatry and loss can shape a life.

The idea for Rules to Live By came in 2018 after the death of one of Suzi’s teenage idols, Mark E. Smith of the band The Fall, whose collaboration with Michael Clark led her to train as a dancer. Beginning as a spontaneous tribute dance in front of 200 people on the night of his death, it has grown into a requiem for heroism, hedonism, rebirth and dark disturbing humour.

A celebration of transformation, a bid to be unforgotten, a dance of rules, constriction, sugar highs and suffocation. Rules To Live By is a rebellious aspiration to a hero’s punk anarchy.

EIDOS is a tribute to Suzi’s grandmother, who was a punk in-her-own-right. She is the hero, the stalwart, Suzi’s personal Vivienne Westwood, the treasure hunter and the curio-with-a-cause.

There will be a 10 minute changeover between the two performances. Audience members can remain seated during this should they wish -there will be no formal interval.