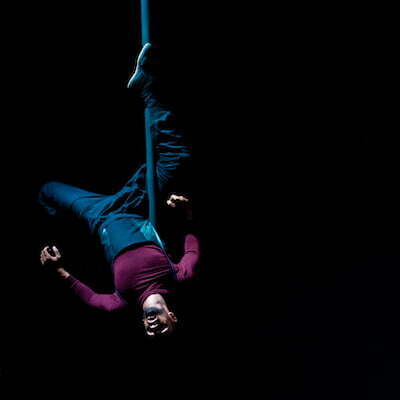 Age Group: 16+ (under 18s accompanied)
Duration: 1h
THIS EVENT WILL NOW TAKE PLACE OFF-SITE AT THE STUDIO @ THE FESTIVAL THEATRE

Something that is “Haram” is forbidden by Islam.

The Chosen Haram deals with themes around sexuality, faith, addiction and connection. It tells the story of two queer men and their chance meeting through a dating app, portraying the highs and lows of their relationship and the barriers they face, both social and cultural, in seeking happiness and personal fulfillment.

Born and raised in Edinburgh, lead artist and performer Sadiq Ali trained at the National Centre for Circus Arts and has performed internationally with Ockham’s Razor. The Chosen Haram is his first full-length show. Actor/circus artist Hauk Pattison has appeared in productions at the National Theatre and RSC, and in films including Notes on a Scandal.