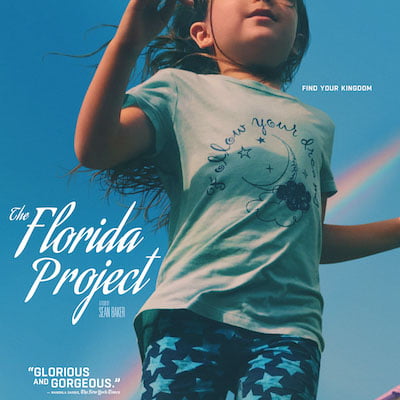 Warm, winning, and gloriously alive, Sean Baker’s The Florida Project is a deeply moving and unforgettably poignant look at childhood.

Set on a stretch of highway just outside the imagined utopia of Disney World, The Florida Project follows six-year-old Moonee (Brooklynn Prince in a stunning breakout turn) and her rebellious mother Halley (Bria Vinaite, another major discovery) over the course of a single summer. The two live week to week at “The Magic Castle,” a budget motel managed by Bobby (a career-best Willem Dafoe), whose stern exterior hides a deep reservoir of kindness and compassion.

"[a] superbly sympathetic portrait of marginalised experience from a film-maker whose great triumph is that he never feels like a tourist"★★★★★ Mark Kermode, The Guardian