Context is Half the Work. A Partial History of the APG 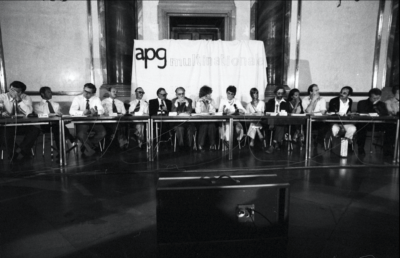 The Artist Placement Group (APG) was founded in the UK in 1966. The group initiated and organised placements for artists within industry and public institutions where they would research, develop ideas and projects in-situ. According to the APG principle, artistic practices and knowledge no longer needed to be confined to the studio, but the reach of the artist could extend to commercial, industrial and government contexts in order to contribute to social and organisational processes at all levels.

Context is Half the Work. A Partial History of the Artist Placement Group explores seven paradigmatic APG placements; it includes research material, video works, art works and documentation of the group’s activity, raising questions still relevant for present day context-based artistic practices. These include sculptor Garth Evans’ two-year fellowship at the British Steel Corporation (1969-70), David Hall’s TV Interruptions, broadcast on Scottish Television in 1971, George Levantis’ journeys on the container cargo ships of Ocean Fleets Ltd (1974-75), Roger Coward’s placement with the Department of the Environment (1975) where he worked with inhabitants of a Birmingham neighbourhood, and John Latham’s association with the Scottish Office (1975-76). Negotiations with the UK Department for Health and Social Security (DHSS) led to two placements for Ian Breakwell, and other artists associated with the APG. The first took place within a psychiatric hospital (1976) and the second was an interdisciplinary APG/DHSS research project which led to the development of an audio-visual therapy method for dementia-afflicted patients (1978-79). In addition, a selection of Barbara Steveni’s contextualizing video walks and interviews with women protagonists of the time will be shown.

The acclaimed exhibition curated by Naomi Hennig and Ulrike Jordan in dialogue with APG co-founder Barbara Steveni debuted at Kunstraum Kreuzberg/Bethanien, Berlin in 2015 (12 September – 8 November). The second iteration of the exhibition staged at Summerhall is the first Scottish exhibition giving an overview of this seminal group and related works, and is reworked in order to highlight the APG projects that took place in Scotland.

The corresponding public engagement programme discusses the APG’s central concepts with a view on current debates and practices surrounding artistic work in social and planning contexts:

Following the general exhibition tour, Roger Coward will give an account of his 1975 placement with the Department of the Environment, during which he and his project group contributed to an urban research study, realising a number of art projects with the local community of Small Heath, Birmingham.

Barbara Steveni, artist and long-term coordinator of the APG, will discuss her involvement with the group, its legacies and its resonance in the present. Jo Melvin has a long connection with APG-members, and will contextualise their concepts and projects, rooted in the artistic debates of the 1960s and 70s. Followed by a Q&A, joined by Roger Coward, Ulrike Jordan, Naomi Hennig and all those who take an interest in the APG project and its legacies.

Screening and Round Table Discussion led by Rewind Database for Artists Video in the 70s and 80s and its Principal Researcher Stephen Partridge and archivist Adam Lockhart, and producer Anna Ridley.

‘There is a Work in the interpretation of the Work’, from Craig Richardson’s ‘John Latham: Incidental Person’ (2007, pp 27-31). An interdisciplinary ‘bing’ seminar and public discussion in four parts I. Art and Aesthetics II. Landscape and Ecology III. Heritage & Community followed by IV. Group Discussion. The event will involve a range of speakers from across the arts and humanities, social and physical sciences to invite debate in regard of the Greendyke and Niddry bing’s that artist John Latham described as ‘Niddrie Women’ and the ‘Heart.’