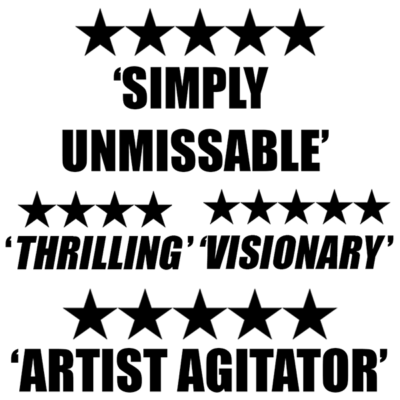 OMG, this ingenious brand new best-ever installation by dynamic, polymath, “artist agitator” Tamsyn Challenger is housed in the spectacular, cavernous, intuitive basement space at our world famous venue Summerhall. A concept such as ‘Hyper Bowl’ comes around once in a lifetime and could be the greatest contemporary art work of a generation.

“I am literally dying to see the historic construction of a sculptural ‘bowl’ that holds a soup of re-fabricated text.”

The meteoric rise of hyperbole is the game and we are the players. ‘Hyper Bowl’ houses the most amazing live performance event of the festival on Sunday 21st Aug in which legendary poets battle it out with top comedians, writers and art critics to see who is the hyperbolic bomb. Hero, icon, poet and sought after lecturer Colin Herd will be the ring master, participants will include Elvis, Arthur Smith, Stephen Fry, Cleopatra, Brian Sewell, Gracie Fields, Joan Rivers, Dali, George Clooney, Dorothy Parker and Liza Tarbuck (some participants tbc). #RIPsubtlety

Tamsyn Challenger’s award-winning exhaustive practise has led to her being described as “the next Tracey Emin”, alongside many other young female artists. Commercially ambiguous, her thrilling ‘outsider’ status has seen her crowd pleasing installations internationally applauded and placed in the Guardian’s Top 5. A journalist said of her recently that “she is the most famous, unfamous artist on the planet right now”, adding that he wasn’t sure that he could think of that many famous visual artists. During her seminal 15 year residency in London she was the innovator behind the now celebrated and globally renowned ‘Haringey Set’. She is one of the last artists ever to breathe the sacred ‘Bacon Air’ left circulating the defunct Colony Rooms in Soho. A “Challenger” by name and nature, DON’T MISS THIS UNMISSABLE ARTIST WHILST SHE’S STILL ALIVE.