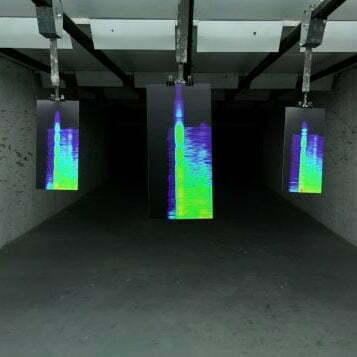 Rubber Coated Steel Forensic audio analyst and artist Lawrence Abu Hamdan’s Rubber Coated Steel testifies to the relationship between technology and power. In 2014 he was asked to analyse audio files that recorded the shots that killed Nadeem Nawara and Mohamed Abu Daher in the West Bank of Palestine.

His audio investigation, which proved that the boys were shot by real bullets and not rubber ones, became the centre of a murder investigation that went through 6 human rights reports and international news networks to the US congress, where it was used to argue that the Israelis had breached the US-Israeli arms agreement. Until such time as a trial is held for the murder of these boys the artist holds his own tribunal for these serial killing sounds in the form of this video. Yet this trial does not preside over the voices of the victims but seeks to amplify their silence, questioning the ways in which rights are being heard today.