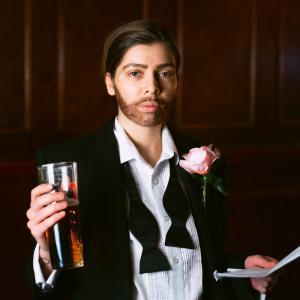 Summerhall and Feral are proud to announce that the 2019 Autopsy Award recipient is Leyla Josephine, the award-winning poet and theatre maker from Glasgow, Scotland, with her brand new solo show Daddy Drag. A tongue in cheek, heartfelt and funny performance all about the myriad kinds of Dads – the good, the bad, and the awful – and how our relationships with our fathers affect us for the rest of our lives.

In Daddy Drag, Leyla Josephine attempts to understand what it means to be a father through her witty performance style, drag costumes and complex but unconditional love for her dad – all tied together by a powerhouse performance from one of the most prominent spoken word artists in Scotland.

Leyla Josephine commented, “I’m so buzzing to get the Autopsy Award from Summerhall. As a solo artist, making and presenting work can sometimes feel like you’re swimming upstream alone and having this support from Autopsy will make that swim much less daunting. Summerhall is one of my favourite places to see theatre and art because of its unique venues, the good atmosphere in the courtyard and its diverse programming – I’m honoured to be programmed alongside some of the best experimental theatre in the country. I love the work of all the Autopsy winners that have come before this and I’m just so excited to have my name on that list. Daddy Drag is such a fun show to perform and I think that audiences of Summerhall are going to really enjoy it.”

The Autopsy Award began as a joint initiative between the Arches and Summerhall in which 1 or 2 shows from the Arches LIVE festival of emergent performance were selected for a Fringe festival run at Summerhall. Summerhall now runs it with help from Feral, the producing partnership of Jill Smith and Kathryn Boyle. From 2019, the Autopsy Award is supported by Allan Wilson.

Allan Wilson commented; “After providing ‘informal’ support for Fringe artists for a number of years, I was delighted to have an opportunity to help finance this year’s Autopsy Award for Summerhall. It was my hope that additional funding would allow an artist working in Scotland to create innovative, challenging work for the Fringe, without having the stress of worrying unduly about raising the funding necessary to produce new work. I am sure that Leyla has produced a piece of ground-breaking work that will not only be worthy of the Autopsy Award, but will become a major success at this year’s Fringe.”