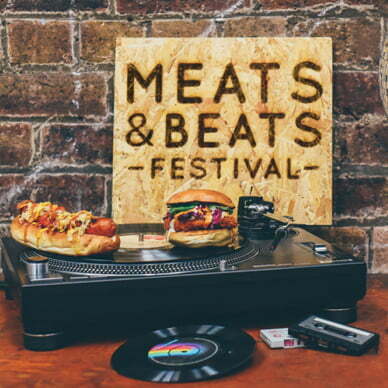 After a sell-out inaugural festival last year, Meats & Beats Festival returns to Edinburgh in a bigger venue! All cooked food moves outside to create an Outdoor Street Food Courtyard, where festival-goers can take a rest from throwing shapes on the dance floor and refuel on meat-stacked dishes.

Meats & Beats Festival is best described as a ‘carnivores playground’, set against a soundtrack of all the cheesiest, ‘hands in the air’ tunes from the last five decades. Where jerkn’ meets twerkn’, burritos meet Blondie, and wings meet Wham! It’s as much about music as it is about food, but most importantly it’s about having an unforgettable night out with mates.

Every hour the music changes decade, starting with the pop classics of the 70s, working through the disco anthems of the 80s, dance tunes of the 90s and teen pop bands of the noughties, climaxing in 2018.

For the competitive eaters, there’s a hotdog-eating competition to enter, or take a trip down memory lane with retro playground games in the courtyard.

So put on your dancing shoes and get ready for a lip-smacking, lip-syncing, tummy & shape busting night out to remember!